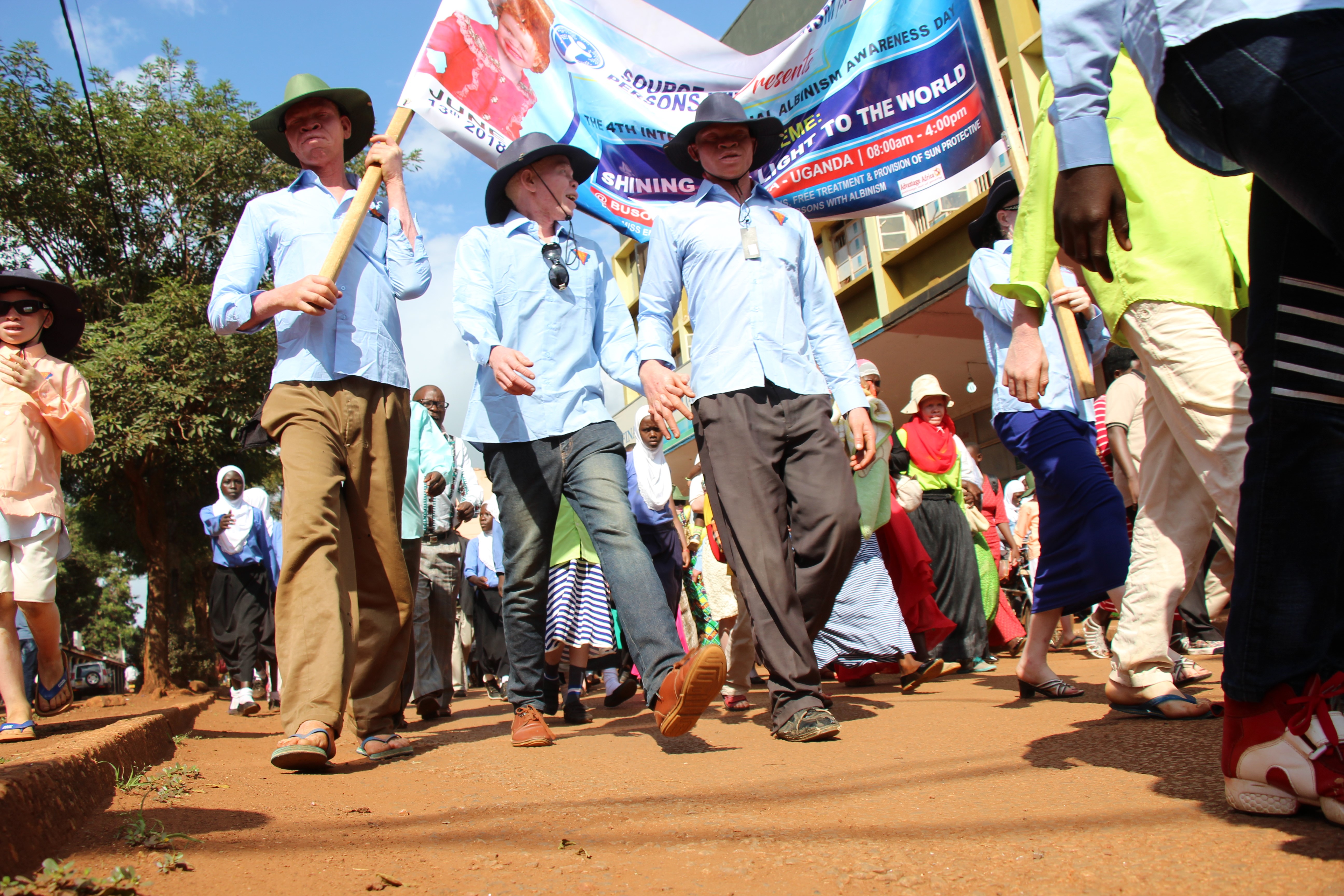 To celebrate International Albinism Awareness Day on June 13, three PFP-IDE alumni with albinism – Peter Ogik from Uganda, and Gamariel Mboya and Isack Idama from Tanzania, reflect on their personal experiences, how they promote albinism self-advocacy, and why inclusive education and employment are especially important to persons with albinism in Africa.

When I was born, nobody in my community had seen a person with albinism before. People told me that I was the result of a curse, and some thought I had supernatural abilities. These sorts of false beliefs about albinism are common in Uganda, because many people do not have access to scientific information. False beliefs cause discrimination, exclusion – and even the threat of lethal violence, due to a false belief that our body parts have magic powers.

Second, we use the media to raise awareness of albinism and engage others. We even persuaded traditional health practitioners to go onto the radio to denounce violence against persons with albinism and have begun training SNUPA members to become citizen journalists, a project I helped further through my PFP-IDE Fellowship at the Institute on Human Development and Disability in Chicago. This kills many birds with the same stone: it creates more positive role models; and at the same time, it puts persons with albinism in control of the stories that are told about them.

Third, SNUPA has created a band that brings together musicians and dancers with and without albinism. Our songs combine educational messages with catchy tunes (a style known as ‘edutainment’) and they have proven very popular on both local and national radio. We have even performed for the President of Uganda, His Excellency Yoweri Museveni.

All these strategies come together in our annual commemoration of International Albinism Awareness Day. The event attracts thousands of people from all over Uganda. It is an opportunity to reach new audiences – and to reflect on all that we have accomplished together. Since SNUPA started work, we have seen more and more persons with albinism included within schools, work places, and in local government. There is still a very long way to go. But, slowly by slowly, people across Uganda are starting to realise that, when persons with albinism are given opportunities, we can achieve anything.

Peter Ogik is chairperson of the Source of the Nile Union for Persons with Albinism. He was a Fall 2018 PFP-IDE Fellow at the University of Illinois Chicago Institute on Human Development and Disability.

For children with albinism, access to inclusive education is especially important to overcome discrimination and stigma. Inclusive education provides opportunities for all students to learn together in one class regardless of their ability with services provided according to their needs. Currently, more than half of children with disabilities in Tanzania are not sent to school because of a lack of professionals to support them in non-inclusive schools, distance from special schools, and social separation and stigma that comes from being separated from students without disabilities.  Being able to learn in an inclusive setting helps ensure that students with disabilities are brought to school and have the educational opportunities they deserve, which are especially hard to reach in the face of discrimination.

Many children with albinism are kept in hiding altogether to avoid persecution or are displaced completely and kept in camps in rural areas with limited security and complete exclusion from their community, where they remain unsafe due to persecution and violence. In the northwestern regions of Mwanza, Tabora, Kagera and Shinyanga, which make up the Tanzania Lake Region, there has been much brutality against students with albinism, many of whom are afraid of being attacked or killed.

Despite all these things, inclusive education has many benefits for children with disabilities and the community as a whole. By placing students with albinism alongside their peers, inclusive education removes them from social exclusion and educates others about albinism, building bonds and respect while reducing stigma within the community. Education enables youth to develop their talents and students with albinism (and other disabilities) can show them when they learn with others. An inclusive learning environment leads to love and self-esteem, as students with disabilities see themselves as members of the community with rights and respect.

Isack Idama is a passionate disability activist and member of SHIVYAWATA, the umbrella body for Disabled Peoples’ Organisations in Tanzania. He was a Fall 2017 ADA International Fellow at the University of New Mexico Center for Development and Disability.

In Africa, the occurrence of albinism (1 in 1,400) is 14 times higher than in Europe and North America, and in Tanzania 1 in 19 people carry the gene for it. Persons with albinism face many challenges when seeking education and trying to achieve their employment goals. My school life was characterized by bullying, name calling and even assumptions that I was not intelligent. Despite all this, I was always ambitious that I will be a doctor one day and my parents believed in me and were positive about this. Being different in the community is very challenging because society sees you differently. When I tried to share my dream of being a doctor, my peers questioned whether I would be able to diagnose patients or if I could become one since they had not seen a doctor with albinism before. There was no career counseling or transition advice, a gap which broadens barriers for individuals with albinism, makes it harder to excel in education, and prevents many people from achieving their professional dreams in employment.

Unemployment levels in Tanzania are generally high, but worse for persons with disabilities, who deal with the misconception that they are unfit for employment. Tanzania has passed a law requiring a 3% employment quota for persons with disabilities, but a survey conducted by Comprehensive Community Based Rehabilitation in Tanzania (CCBRT) shows that only 0.7% of employees have a disability of some kind. Persons with albinism face additional discrimination and many are not able to secure employment, which advocacy campaigns are working to change in Tanzania.

During my recent PFP-IDE Fellowship at the Center for Learning and Leadership at the University of Oklahoma Health Sciences Center, I gathered some key lessons that will help me promote inclusive employment for persons with disabilities (including those with albinism) in Tanzania. One lesson from the Fellowship is how important it is to build support for persons with albinism at the family level. This makes an enormous difference to their potential for employment and success since family members play an important role in creating resilience and providing empathy to youth with albinism. My second lesson is that in order to create inclusive employment opportunities, we must not only educate employers about disability but also change their perception of what persons with disabilities can contribute and achieve.

As we commemorate International Albinism Awareness Day, we are still standing strong. Disability is natural and albinism is beautiful. Let us capture all qualities and forms of beauty that persons with albinism can contribute to our own communities.

Gamariel Mboya is head of administration at the Aga Khan University in Tanzania. He was a Spring 2019 PFP-IDE Fellow at the University of Oklahoma Health Sciences Center.