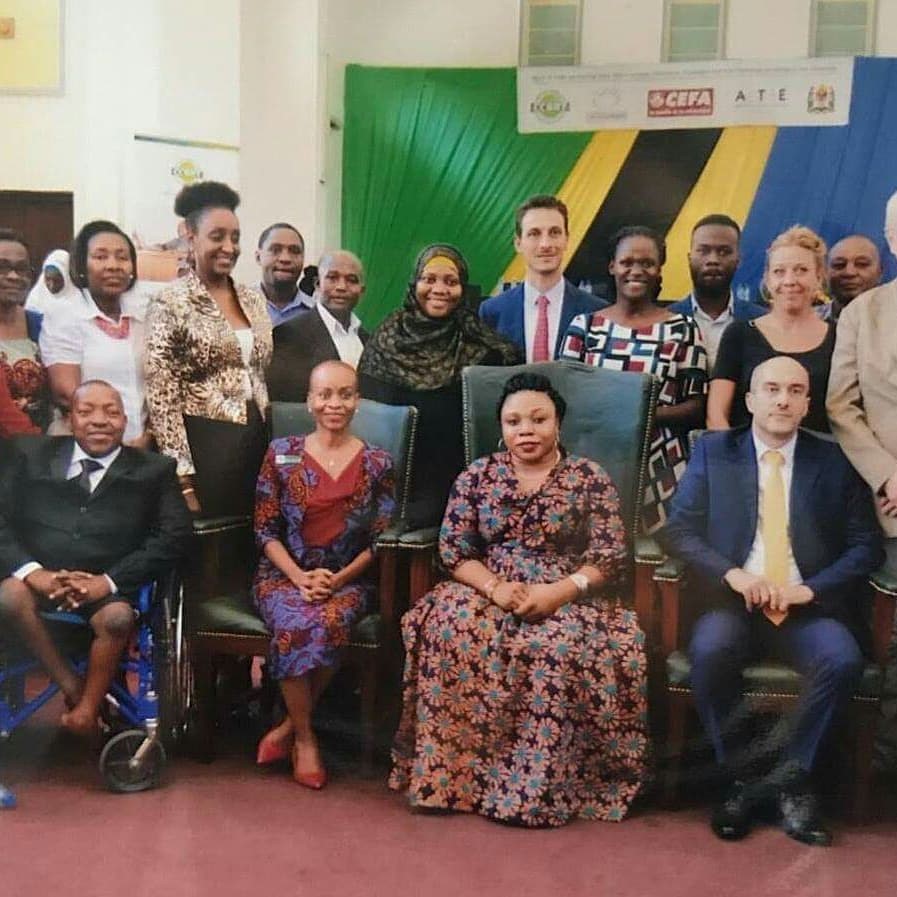 HerAbility Foundation meeting with female students with disabilities at the University of Dar es Salaam.

Since returning to Tanzania in June 2018, I have been working to implement my follow-on project on Empowering and Linking Girls with Disabilities with Internship and Employment Opportunities. To do this, I created an initiative called the HerAbility Foundation and started a pilot project at the University of Dar es Salaam that helps women with disabilities find employment.  HerAbility implements the project closely with the Ministry of Gender and Special Needs, the University of Dar es Salaam Students with Disabilities Association and university officials and has so far enabled one female student with a disability to find and keep a well-paid job beyond graduation, with more to come. HerAbility has also found employment for four other women with disabilities by engaging directly with employers and partnering with CCBRT (Comprehensive Community Based Rehabilitation in Tanzania), which is the largest local provider of disability services in the country, and CEFA (European Committee for Training and Agriculture).

I spent my PFP-IDE Fellowship at the University of Vermont Center for Disability and Community Inclusion (CDCI) in the U.S in Spring 2018., where I learned much about advocacy and influencing policymakers. In Vermont, I spoke at the 2018 Voices and Choices Conference, where self-advocates from across the state (Green Mountain Self-Advocates) come together to learn about decision-making and how to promote inclusion. Since returning to Tanzania, I have used these lessons to engage members of the government at all levels and increase my advocacy work through the Institutions for Inclusive Development (I4ID), an initiative supported by the U.K. government’s Department for International Development (DFID).

I have made key contacts and held meetings with the Prime Minister’s Office, the Ministry of Education, with several Members of Parliament and with regional and local authorities. Advocating has enabled me and my partners to influence several positive decisions, including getting the Ministry of Education to accept a leading role in harmonizing Tanzanian Sign Language so that deaf students will have better learning outcomes, leading to better employability and job retention. I am also working with I4ID at the local level through the municipal councils in Mwanza and Mbeya, where we advocate for vendors with disabilities to be included in Tanzania’s national policy to identify and recognize urban businesses.

Stella Ikupa Alex, Deputy Minister in the Office of the Prime Minister of Tanzania, responsible for PWD policy, meets with Victoria Lihiru and representatives from CEFA and CCBRT.

During my Fellowship, I also learned about importance of data, facts and figures. In Tanzania there is still quite a big gap in terms of documented stories and simple facts and figures on disabilities. Research can be expensive, so I and Ummy Nderiananga, Chairperson for the Federation for Disabled People with Disabilities (SHIVYAWATA) have made it our goal to find small-scale facts, data and figures within activities that have already been planned. In Dodoma, the capital of Tanzania, we conducted a simple survey on the employability of people with disabilities within civil society organizations (CSOs). Our work revealed many CSOs as having fallen short in complying with the Tanzania Disability Act of 2010, which calls for three percent of employment to be reserved for people with disabilities in any organization with more than 20 employees. Ummy and I are now strategizing on a monthly ‘Story Telling’ empowerment session for women and girls with disabilities.

While in Vermont, one of my mentors Dr. Jesse Suter talked about the need to ‘lead from where you are’. In line with Jesse’s advice, I have made it my business to make change from where I am. For example, recently with I4ID, I convinced my team members to include a female celebrity with a disability in the list of celebrities they were engaging to raise awareness about menstrual health management.  I have also influenced the I CAN Awards, which are for successful persons with disabilities, to offer more recognition and opportunities for women with disabilities. The I CAN Awards, which are organized by the great philanthropist Dr. Reginald Mengi, originally had only one designated awardee for persons with disabilities, but I convinced them to have two winner per category, a man and a woman, in recognition of the level of marginalization that women with disabilities face. This will enhance visibility of abilities and capabilities of women with disabilities in a platform which brings together highest government officials, civil society actors, DPOs, and disability community.

To connect with other disability advocates, I write monthly articles which are published in newspapers. I have spoken at several conferences, and in December 2018, I was a speaker on the ‘You Lead East Africa Youth Conference’ where I discussed the status of Women and Disability Inclusion in East Africa. I also moderated the 2018 National Disability Forum with SHIVYAWATA. I work closely with fellow alumni and sit on a voluntary employment board for PWD by one of the alumni,  Novath Rukwago.  I am also humbled to be one of the selected people to advise on Big Lottery Fund programs for PWD through the newly established Disability Advisory Panel.

Learn more about Victoria’s PFP-IDE Fellowship in Vermont and inclusive employment in Tanzania.